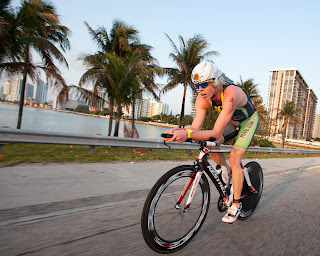 That was the motto as I arrived to transition for my first ever title defense and found out that as they were afraid of the wind was howling and the swim course had been shortened and moved. My first thought was CRAP! Now there is a shorter, easier swim. AND a long long run to T1. Could they make this any more runner friendly????
I stood around with some of the other strong swimmers and we bitched and moaned, talked about how Philip, the awesome race director( I really mean that!!!) was screwing us, how the pts for Hy-Vee would be messed up and basically whining like some rank amateurs.
Post bitch session, I realized I was still wearing #1 and should get my head on straight and do what I can. Always better to control what you can, so went out on my warm up and tried to start thinking positively about the race, especially about my favorite bike course!
As the sun came up and we headed to the swim start we saw that the first buoy was barely in the water, awesome long run in and out, but at that point it was gonna be what it was gonna be so, NO EXCUSES!
They held us a long time at the start but once they unleashed the hounds it was a mad dash to the water in what I would argue is the most competitive and deep mens field ever assembled in a non-drafting olympic distance race. The guy that got 9th has 3 Olympic medals…
The swim was choppy but not bad and we made it back to shore rather unscathed. Side note, first time my hair has ever been a factor was when my cap came off with about 300m to go on the swim, nothing like a lil hair to block your view of the shore. Anyway, starting sprinting down the sidewalk knowing some of the worlds greatest runners were on my heels. I was in 4th and believe it or not only lost one spot to Gemmel at the end of the run. Needless to say I was quite pleased with that as we grabbed the machines and headed out.
This is becoming my element. I am a swimmer, but my bike is improving and I am starting to really enjoy getting strapped into the PI kicks and smashing! I hit it hard and by mile 2 had a lead that I decided I was gonna try and maximize over the 40K. I really like this course. I really like my Kestrel 4000. I really like my Hulk juice from First Endurance( 1/2 scoop pre race, 1 scoop Lemon-lime EFS, 1 vanilla gel package, shake and serve cold). All the things I like really came together and I felt strong and in control the whole ride. I knew I needed to put a hurt on the boys as they were all pacing each other in a group and I was out breaking the wind solo.
By the time I got to T2 I heard I had 90 sec, which was nice to hear but in reality it was more like 65. I threw on the lime green and black PI Transitions and we headed out, this time with my headband! Yes that is a big deal. On the run I felt strong and the thousand fans or so lining the sidewalk heading out really helped me get in the zone. Time to hammer and see what I could maintain through the turn around. Turned out to be about 40 sec I guessed which was good, but Filip can run and so can Matt, so it was head down time. My mantra when I run is “run tough” so I did was I could. The big man and the Czech caught me with about a half mile to go and I did what I could but didnt have the wheels to stay with them. I sprinted in and held on for third which all things considered I was really pleased with.
Obviously, I would have loved to defend the title. I think I really could have if the swim had been normal length and rough in the bay but no excuses, they were better than I was on Sunday. I gave it my best and came away with my best ever legit 10k off the bike and my head held high.
If Memphis in May goes well I will be all set for Hy-Vee and I still made some good money, including the bike prime. I love that race, and Philip does an outstanding job of the directing this race. Next year hopefully we will be in the bay no matter the weather but a short swim is way better than no swim!
Now, 12 or so days of good training and then on the road for 3 races in 3 weekends. I love the racing season, makes all those cold rides in the winter worth it!
PS. I got one of the best compliments I have ever received after the race. A coach of another athlete came up to me and said he knew I would have loved the longer swim, but he really respected the way I race, and loved watching it. That means a lot. I know I can’t run with the best yet, but as Prefontaine always said, might as well win the race from the front!