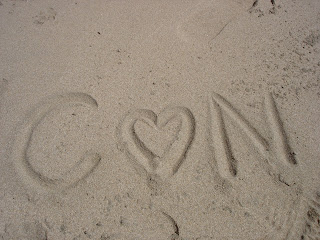 As I look back on 2010 I gotta say it went really well. The slogan for the year was “All In” and considering I won my first major race, was consistently in the top 5, and recovered to form again after a stress fracture I would say it was an accurate tag. Then on top of all that I am getting married in two days to my beautiful fiancé Natalie here in Boulder. If that isn’t all in, then I guess I don’t know what is.

After the proposal in November it has been a bit of whirl wind to get the wedding planned, try and get my sponsors locked down for next year, and attempt to put together a race schedule based on the never ending changes to races and series’. The off season was great with an awesome trip back to Iowa City for the OSU football game and a good catch up with the old crew. Then the next weekend Natalie and I took an engagement celebration trip to Vegas and had a wonderful time losing money and relaxing.
I have been back to training for about three weeks now and things are slowly coming back. It always amazes me how you can go so quickly from a highly tuned athlete to a weekend warrior. Although this year I only put on about 3 lbs in my weeks off, which versus the 10 I accumulated last year was a nice bonus trying to run again.
The way the schedule is setting up it looks like my first race will be the US Sprint Championships down in FL in March followed by a couple more trips to the Sunshine state for Miami Int and South Beach. There are just so many races this year that even limiting myself to sprint and olympic distance stuff doesn’t really narrow it down much.
The wedding is this Saturday and will be followed by a couple no training days in Santa Fe. I am really excited for the ceremony and the fact that a couple of my college buddies were able to make the trip on such short notice is awesome. Just a small ceremony at Natalie’s parents place but it will be a good time no doubt.
Then it will be time to get serious about training and start cranking things up for the season. There is definitely a balance of base/speed and too much too early but the way this sport is becoming more and more competitive you have to be ready in the spring or you will get thumped.
Gotta finish the last minute wedding stuff, and then get in one last good swim before I head to the airport to pick up the Fella’s. Happy New Year to all and hopefully 2011 will be even bigger and better than 2010!

One thought on “The year that was All In…”