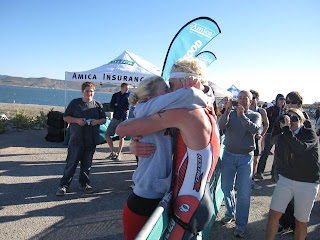 This past weekend was the conclusion of the 2010 racing season for me, and it went down at the Amica 19.7 Sprint Championships in Phoenix, AZ. Needless to say the race, while well run, was not the reason that this is the most memorable race I have ever done. That distinction lies with the fact that it was the race at which I sealed the deal and proposed to my girlfriend Natalie Cables.
The race went well, good swim, strong ride, and a decent run, but about half way through the run my mind shifted gears when I realized I was not going to be able to catch Ben and therefore should probably move on to thinking about the next, and more important part of the race.
I had been thinking for about a month that this race would be a good opportunity to ask Natalie to marry me. It gave me just the right amount of opportunity for embarrassment, and call it selfish, but it gave me a guarantee that no matter how the race went it would be a great day. Early in the week I sucked it up and talked to Natalie’s parents and asked about marrying their daughter. Luckily, they were all for it and so I spent the week making sure Natalie had no idea. Once I had talked to Rick and Cindy, which was probably the most nerve wracking part, I started to think of ways I could get the ring to finish line for the proposal. Since I wasn’t sure if I would know anyone there that I trusted with the ring, and that wasn’t also racing, I decided to take my chances and slip it in her bag with some of my clothes. At least that way, as long as she was at the finish, so was the ring.
So, after crossing the finish line I congratulated Ben, and headed straight for my girl. Hugs and kisses…a couple deep breathes, and down to a knee. I mumbled something about how it was the end of an amazing season and she was such a huge part of it and I wanted her to be there every season to come, will you marry me. I knew no matter how many times I ran through it in my head it wouldn’t come out right, so went with what I had and spit it out. Luckily she said yes, or at least teared up and smiled and that was that. Pull the ring out of her bag, and I am now engaged to the most beautiful, amazing woman I know, Natalie Cables.
She was completely surprised and the people at the finish were great. A few took photos and everyone was extremely excited. Big thanks to Liz Hichens and her husband for sending me some photo’s including the one above.
Also, my apologies to Ben if I took anything away from his victory, certainly not my intent. Obviously we race to win, so I had hoped to come away with the W in the race too, but was going to propose either way, and thanks to him for being so supportive of the effort.
Now a couple weeks of off time, doughnuts, and beer and then back to the grind for 2011.
Hopefully, getting married sometime next July depending on the race schedule. Thanks for all the love we have gotten on Twitter and Facebook, the triathlon community is amazing!