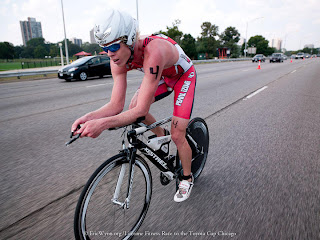 Well this past weekend was one of my favorite races of the year every year, but as the title to this post implies it was a fast start with a painful end.
Coming off of a week in Europe and this being the 3rd race in eight days I knew I was putting a little bit out there but after a solid week of training, and feeling like I was over the jet lag I was really excited for race day. I was again staying in one of the awesome condo units in Lake Shore East and a big thanks to Magellan owner David Carlins for allowing us to stay in his buildings. The location is great for the race, right next to transition, and the places are super nice. Definitely would be a top choice if I ever decide to again call the midwest home.
Anyway, morning of the race I felt great and got in a good pool warm up with Eric Limkemann, and thought that everything was on track. Problem was the race wasn’t until noon, which is an odd time as far as food goes, and as the race was about to start I realized I was in a bit of trouble because I already felt hungry. Also if you have ever done Chicago you know that transition and the swim start are about a mile apart so running back and grabbing a gel or a bar was out of the question. So, with an uneasy feeling we started the race, and it started great. My pool warm up had been a success and I jumped out in front before the first buoy and then used the long back stretch to open up a gap on the field. I have never before won the swim at Chicago, so coming out first was a solid start and then tried to maintain over the course of the 800m run to t1. Once on the trusty Kestrel Airfoil it was onto Lake Shore Drive for an out and back bike.
Oh and did I mention it was hot. About 95 with some solid humidity, which for a CO kid is not ideal, and so I spent the whole bike trying to drink enough and eat the gel that I had to get ready for the run. I rode hard, and was able to maintain or grow my lead until I came off the bike with a 40sec gap of Fretta, and almost two minutes to a group of 5. T2 went fine, but three steps into the run I knew it was gonna be a long one.
Almost immediately I realized my turnover was really low and no matter what I did my legs just felt like bricks. As I went by Natalie at the 1/2 mile mark she was very encouraging but I knew my day was almost over. Mark caught me about mile 1.5 and then slowly the rest of the field came and went as I crept along. I have done some painful runs before but this ranks right at the top. Overheating, hungry, and dead I actually came to a stop at an aid station for the first time in my triathlon career. Drank about 5 cups of water and started jogging again. It was the longest 10k ever, but I managed to get it together and at least run in the last mile, finishing 15th.
Post race I was pissed! There is nothing worse than having a bad race and knowing exactly why and that it could have been avoided. Now I knew the racing the week before was tough, and that the flight from Europe can leave a mark, but I will chalk up this poor run solely to my lack of planning my food out!!
Race day tip… no matter what time of day the race is, make sure you have a plan for what you are going to eat, and more importantly follow your plan. I would rather have been a little full to start the swim than hungry.
To end on a positive note, the trip was fun. Natalie got to see Chicago for the first time. I met up with a college buddy for dinner Sunday night, and I learned a few more lessons. Plenty of racing left in the year and a little bit of extra motivation heading into a big racing block in 3 weeks. It all starts with Pro Nat’s in AL on the 25th…