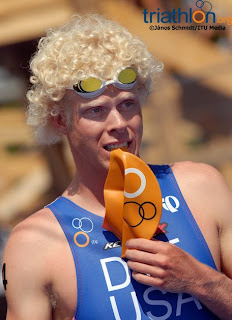 The second leg of my journey to Lausanne was the team relay competition. The race is formatted as two men and two women from the same country each complete a super sprint triathlon, in this case a 280m swim/6k bike/ 1.35k run. Now if you know me at all you know that is the absolute definition of my wheel house, the triathlon equivalent of the 200free in swimming!

Anyway, the format first debuted last year at Hy-Vee and was a big success and this time around the IOC was at the race to watch and determine if the event will be added to the 2016 Olympic program. The Swiss were the reigning champs and favorites going in but with all the things that can happen, not to mention it is draft legal, it was anyone’s race.
The American team consisted and was ordered as Amanda Felder, Dustin McLarty, Jen Spieldenner, and myself. The race started well but the top two or three ranked women in the world led off for their teams so Amanda did a nice job of keeping us in the race during the first leg and then Dustin threw down on the swim to pull us back into the race. Jen held her own and I inherited the race in 14th place with the eventual 3 podium teams way off the front and a large group about 45 seconds up.
I hit the water and immediately passed the South African’s and set my sights on the larger groups ahead. As we exited the lake I had moved up considerably and within the first kilometer on the bike had caught and passed the Aussie’s and Brit’s. I hammered the bike and reeled in the big group right before T2 coming in at the front and headed out for the run. Now I am still working on my 10k but my 1k is solid and I was able to run with the group and stay in the top 3 positions heading to the finish bringing the USA in in 8th. The team put in a solid performance, especially considering the team was assembled basically on site, and I came away with the fastest triathlon split of the day, which considering the guys on the winning team was definitely an accomplishment!
I absolutely loved the team race! It brought me back to my swimming days of relays and it was just really fun to be directly on a team, in a huge race with short splits just going as fast as you possibly can. I really hope the IOC liked what they saw as the team relay would certainly enhance my chances of making the 2016 Olympic team and it brings a whole new, short, fast, spectator friendly aspect to the sometimes boring and hard to watch sport of triathlon. Not to knock Ironman in any way, but it is just not fun to watch.