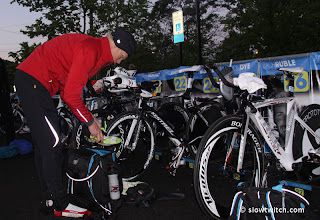 This past weekend I flew down to Knoxville for my first Rev3 experience with their olympic distance race. Made the trip with my girlfriend Natalie, and it was the first time she has been to a race so the whole trip was a lot of fun. Getting to Knoxville was pleasantly uneventful as my boy Nate drove my bike and that part of Tennessee was unaffected by the recent flooding. Flew in to Nashville, grabbed a car, and headed a couple hours down the road. Once there we settled into the room, drove around a bit to see the course and headed to Calhoun’s which is some really good BBQ if you are ever in Knoxville.
Saturday started with a quick swim in the river, which was pretty boring as the TVA had used the dams to essentially eliminate the current. Followed that up with some breakfast and a quick brick to get the legs popping and then it was off to the Rev3 expo for my first ever press conference. Gotta say it was pretty cool to be on a stage answering questions and sitting between Chis Lieto and Terrenzo Bazzone, two of the best in the game. After that was a short pro meeting and then grabbed dinner at the Mellow Mushroom, awesome pizza, with Brian Fleischman. Early to bed and then up and at ’em for the 7:45 start.
When we woke up Sunday the weather was cold, probably low 50’s, which sucked but was definitely better than the projected low 40’s and the sun was coming up so there was hope of some warmth by race time. Usual bike warm up to the start and then went about the routine in transition and headed up the river a bit to where the start was. Water was chilly but luckily not a wet suit race, which is big for us swimmers, especially in a field that contains so many major cyclists!
Lead the swim wire to wire and got out of transition in good time just behind Matty. However, that was the last of the smooth part of the race. About mile 4 we headed down a really rough, steep hill into a construction zone and the water bottle that was mounted in between my aero bars just popped out. But going 35mph I decided I couldn’t stop without endangering myself or someone else and continued pedalling…oops. About a minute later I was standing on the side of the road having my numbers X’d and watching guys go by as I took my penalty for abandoning equipment. Now I understand the rule, but this was not in the spirit of it…all I am gonna say.
Once I was riding again I hammered to catch the guys that had passed me and did the best I could to regain position. The course was amazing, very rolling and hilly with some tough climbs and harsh decents that made for a really fun, slow bike leg. Didn’t have any water so at that point just hoped the cramps would stave off till after the run.
I ran well, only being passed by Terrenzo and finished 5th just 20 seconds behind Bjorn which was a bit frustrating but I guess thats racing. In the end the water bottle cost me a couple bucks and some places but I maintained my consistent top 5 results and beat some really solid competition. Rev3 put on a great race and I definitely recommend doing one of them just for the experience. The jumbotron and the staff make for a great experience.
Post race Natalie and I drove to the TN-KY border to see my grandma, check out the ‘ol family farm, relax and chow down some good southern grub. Great trip, good race.
Now just gotta decide whats next on the schedule…