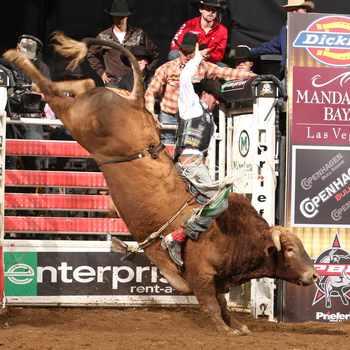 Don’t get me wrong, I absolutely love the sport of triathlon, but sometimes I wish it was just a little more badass; kind of like say, bull riding. Tuesday night my brother and myself headed down to Denver to the National Western Stock Show. We were down there to wander around the stock yards, eat some quality food, and most importantly watch 175lbs men try and sit on 2000lbs bulls for 8 seconds. The second qualifying go-around was Tuesday night and we got to see some amazing athletes. We got to see the reigning world champ, who happens to be from Longmont, as well as a slew of other top riders battle the beast. In the end I determined one thing. Bull riding is AWESOME!

These guys are some of the toughest athletes in the world and probably some of the most fearless. It is funny how when you watch sports center and Kobe goes down hard, the mc talks about a major scare. What he might have rolled an ankle? Tuesday night I watched a guy get his helmet smashed and he walked away. I saw a guy get drug around by his hand, and I saw a guy that had broken his neck the night before walking around the chutes. Cowboys are tough, makes me really feel like a bit of a pansy having dealt with a measly little foot problem this last year. If you want to see some amazing athletes, both the cowboys and the bulls, go check out the PBR, or watch it on Versus. In another life, maybe I will try my hand at it. I’m tough right?