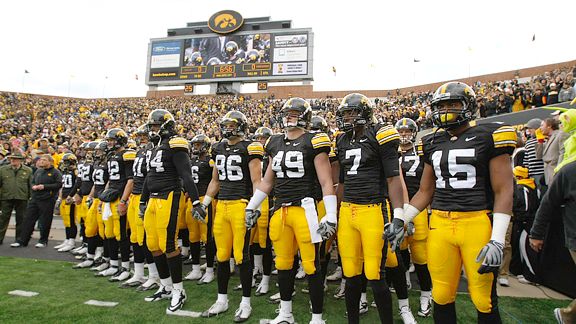 Just needed to throw up some quick props to my boys in black in gold. Last night Iowa took on Georgia Tech in the Orange bowl and going in were the unanimous underdogs. Pretty much sounded like every other big win we had this year. No matter, with the best college coach in the country and a defense that is second to none the Hawks went down to Miami and stopped the best rushing attack in the country. The offense actually looked competent and Ferentz locked up another 11 win season, in a huge bowl win for Iowa and the Big Ten. After a couple less than awesome bowl seasons the Big Ten regained some swagger by having four teams knock off top 15 teams in one bowl season.

Looking to next year, should be a good one. The running attack is back. Our best defensive player Clayborn is coming back, and we can all hope Ferentz will again politely decline every available pro job. Great day to be a Hawkeye!