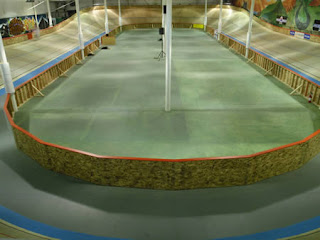 Yesterdays cycling workout was to get my first taste of the Velodrome here in Boulder at Boulder Indoor Cycling. It has been around for about a year now but I had never made it in there. So went in there with Allen, Neal, and Grant and got a bit of a tutorial on how to ride really fast in a circle on steeply banked turns. Needless to say when you first go in there having never been on a velodrome before it is a bit intimidating. The track at BIC is only 138m long, which is quite a bit shorter than the Olympic sized one of 250m. With a short track comes shorter straight aways and more importantly steeper banked turns, in this case about 45 degrees.

After Neal went of the basics of track etiquette and how to get on and off the track safely my heart was racing as I was staring at the banked corner trying to figure out how I was going to go around that without falling over. In track riding it is actually way more dangerous to go slow than it is to go fast. Once you are up to speed, about 15mph, you have no problem navigating the turns. Unfortunately Neal needed a reminder of his own lesson when he took a spill sliding off the wall going too slow in a turn. Talk about making you second guess. If the guy that races the track just fell, I am totally screwed. From then on I was very careful to error on the side of too fast.

The track is awesome! After getting the hang of it and then doing some good exchanges and pacelines with Allen and Grant I just had the urge to go really fast, and so I tried to crank as much as I could around the thing. It was definitely a battle to mentally stay calm as you are cranking around the wall basically parallel to the ground and not freak out but it was fun. I can’t wait to go back and get more comfortable on it, but I can’t imagine being out there for a race with 20 other guys. Maybe on the big track, but track cyclists I’m pretty sure have no fear.