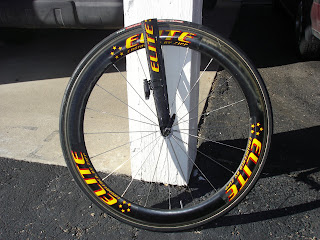 So a quick recap of the last week. Last weekend Jimmy, Kristen and I went down to Tucson for Trifest. The trip was good, had a good run way up at altitude in Los Alamos, great ride up Mt Lemmon in AZ, and a couple other nice runs in some canyons. The expo was good for us as we were able to make some good contacts and hopefully further some relationships for the team, but on the whole a lot of people seemed dissapointed in the turnout. Although I can’t say I am surprised I mean who wants to go to AZ for a weekend just to see an expo with no race or other things going on. I think it could be a big success if they paired it with a race or something, but I question the events future if nothing changes.

Then once back in BOCO had a tough week of training, not a ton of volume but almost everything was high intensity including some leg crunching 40/20 intervals in the pain cave Wed, followed by our first track session on Thurs. Foot was pretty sore after that but just keep plugging along.

Then on to the exciting stuff…this weekend the plan was to do a criterium bike race Sat, and then pair that with the Runnin’ of the Green 7k in Denver Sunday. Warmed up well for the race and was feeling pretty good the first couple of laps. Took a couple strong pulls at the front and toyed with the idea of a break away but for whatever reason decided to hold back a bit…big mistake!! I was about 15 guys from the front when some “cyclist” went down on a straight away taking out a couple other guys and leaving me with no place to go but over the top of them. I came out pretty much unscathed which is amazing, but my fork was severed from my frame and the 404 on the front is toasted. I didn’t cause the crash but I was the only one that couldn’t ride away from it.

Now I have never done a true bike race before, draft legal tri’s but no bike races and cyclists are always scetched out about triathletes racing. Well this is a perfect example that it is not what you do but how good you are at it, and a triathlete who does draft legal like myself is certainly better than a cat 4 or 5 cyclist. Honestly, the blame for the crash I think falls on the race organizers because they put cat 3-5 together which meant 75 guys, some of which had already raced, on the road at the same time which lead to 2 big crashes and half the field not finishing.

I was lucky I didn’t get hurt but the pocketbook isn’t real psyched about the bike. Just another reason why the bike companies need to stop jerking the team around and help us figure out what our options are.

Big thanks to Ryan and Colorado Multisport for looking over my bike and loaning me a fork till I can get things squared away!

Hopefully don’t wake up too sore tomorrow morning and the running race goes a little better. At least I think no one is going to take me out.